Many years ago I used to love to bake (my sister used to call me cookie master!). But when I discovered I was hypoglycemic I stopped eating sweets and stopped baking for a very long time (usually the only sweet thing I will eat is fruit, with lots of protein, but no real desserts). Nowadays, every once in a while (maybe once every couple months) I will get a craving and actually bake or make a dessert. When making desserts, I use sweetener alternatives that don't make me react that much, such as agave. Too much still makes me feel ill, so when baking or making sweets I still have to watch the amount of alternative sweeteners, and make sure the dessert is protein rich. I also try to limit my other carbs too, and really watch the serving size (wish I could eat larger servings, since I love sweets and I need to gain weight, but since I get sick if I eat too much, I need to limit myself strictly to one small serving). So it can be difficult finding recipes that I can eat or that I can easily convert. A lot of the time I look at vegan, gluten-free, and sometimes raw websites since often these recipes are made with ingredients I can eat, or I only have to alter the recipes a little.

One of my favorite recipes is a black bean brownie recipe from 'Baking with agave' by Ania Catalano. The recipe is posted on the 101 cookbooks website. This recipe is not only delicious, but it is made with agave, a single serving does not make me react (I like to drink organic soy or cow milk with the brownie, for extra protein and since the combo of milk and brownies is yummy!), and I didn't need to change the recipe at all. Catalano has hypoglycemia so she uses agave and alternative sweeteners, and also does not use white/refined wheat flour in her recipes. I have seen other so called 'hypoglycemic' recipes that don't use white sugar but that use refined/white wheat flour, so it is nice that she really knows how to bake for this condition, since she has it herself too! Her recipe is also gluten free and grain/flour free (basically the ground nuts serve as the flour). Now some of her other recipes still have a touch too much agave for me (different people have different reactions to sweeteners so some people may be able to tolerate much higher amounts of agave than I, and others may not be able to tolerate it at all). I highly recommend getting her cookbook too.

For agave brands, I basically just get whatever organic agave brand is onsale or least expensive at whole foods or another natural foods store (I have tried a few different brands and they are all pretty good). There are two versions of agave: light/regular and dark. The light version is sweet and heavenly, while the dark version is a bit richer in taste and tastes a little like maple syrup (not exactly like it but it reminds me of it). Agave is technically sweeter than white sugar, so when using it in recipes, you need to use less than the amount of other sweeteners. But Agave is mostly fructose and low glycemic.
Posted by Solarkat at 9:30 PM No comments: 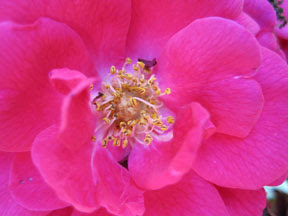 For my newest eco living article on anb (all natural beauty) mall for the month of February, I choose to write about the rose: a symbol of love and beauty.

Additional notes, not posted in the article: there are many good vendors for organic roses. You can buy them already dried, or you can dry fresh organic roses (just hang the bunch upside down and let it dry out). I had planned to carry some in my store (but at the time of this writing, I am currently on hiatus, so Earth Alkemie is closed right now, but check back later! I hope to reopen this spring). You may be able to find them locally: either buy fresh organic roses (Whole Foods usually carries them, and you can get a small bunch for only a few dollars--surprisingly much cheaper than other food stores and floral shops--at least in my local store), or check the dried herb or the tea aisle of health food stores. Your local small natural skin care company may carry them. You can find some on amazon. Also one of my favorite herbal vendors, Mountain Rose Herbs carries some.

Just wanted to mention that my recipe is for an infusion (which is pretty much a strong tea) which is different than a hydrosol, floral water, or an aromatherapy (essential oil) spray .

I hope everyone enjoys the article!
Posted by Solarkat at 11:45 PM No comments:

It's been a very long time since I've posted on a regular basis. A few years ago I stopped posting regularly because I was completing my master's in environmental science and policy (my research and thesis), moderating and answering questions on Garden of Wisdom's forum (which was very time consuming and extremely busy back then), and writing Eco Living articles for the anb (all natural beauty) mall. After I graduated I started an all natural skin care and mineral makeup business, Earth Alkemie, and in the past couple years, much of my online time was devoted to writing entries for Earth Alkemie's blog and EA's forum and EA's face book, answering EA emails, other emails and PMs etc, posting on various other forums, and writing my monthly Eco Living articles. With my health issues (and also helping my dad with his health issues too) that didn't leave me much time to post here.

But I miss posting on Solarkat's eco blog. I loved posting on this blog in the past since this has always been a place for my own thoughts on a wide range of subjects: plants, aromatherapy, herbalism, natural products, eco living, vegetarianism, ecological issues, etc. And even a few things that have nothing to do with some form of environmentalism, like my favorite musicians. Just basically whatever was on my mind on the moment. :) And I have missed having that outlet. I do have a personal face book page and also post regularly on EA's blog, but it is not the same as posting on a personal blog. I am just too wordy and there are some thing that just don't belong on a business blog.

So I am going to try to start posting regularly again. Right now I am on hiatus for my skin care business (because of health reasons) so posts will probably be more often now than in the future when I reopen Earth Alkemie (which I hope will be sometime in March or April. No set date yet). But for now, I will start posting again. :)
Posted by Solarkat at 11:59 PM No comments:

The Home Page Of This Blog Is

Solarkat
I am an environmentalist, an aromatherapy & herbal formulator, and a natural perfumer. I have been learning about environmental issues since I was a teen, and aromatherapy & herbalism since 2001. A year ago, I started studying Traditional Chinese Medicine & Ayurveda. I have a B.A. in Environmental Studies (Biology) and a M.S. in Environmental Science and Policy. I have taken many herbalism and aromatherapy courses and I am currently taking more! My past and current teachers include Robert Tisserand, Jeanne Rose, Sylla Sheppard Hanger, Andrea Butje, David Crow, Peter Holmes, Rosemary Gladstar, Susun Weed, Michael and Lesley Tierra, Rosalee de la Foret, and others! My environmental interests include conservation, environmental education, and ethnobotany. Crafting interests include all natural and organic skin care, vegetarian and vegan products, kitchen cosmetics, aromatherapy, herbalism, eco-friendly house cleaning products, and perfumery. I am the owner and formulator of Earth Alkemie, a green, all natural, aromatherapy & herbal skin care and perfume company. I am the Eco Living writer at anb mall, and Eco Living & Formulating Expert at all natural beauty website.

My Other Websites And Articles